South America
Decolonize Hispanic Heritage Month or Get Rid of It
17 September, 2016 by avispa in South America
Spread the love 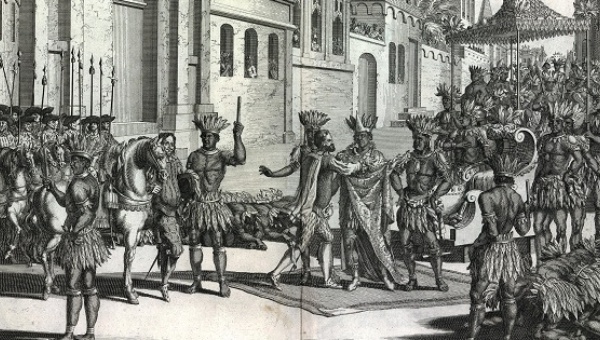 By Adriana Maestras
People of Mexican, Central American, and South American descent shouldn’t have to celebrate heritage that is tied to invaders and colonizers.

Since the end of the Reagan administration, organizations and government entities have been annually celebrating Hispanic Heritage Month between Sept. 15 – Oct. 15.

The concept for celebrating Hispanic Heritage Month actually goes back to 1968 when it began as Hispanic Heritage Week. Sept. 15 was chosen because it marks the anniversary of independence of five Central American countries: Costa Rica, El Salvador, Guatemala, Honduras and Nicaragua. On Sept. 16, Mexico and Chile celebrate their independence from Spanish rule.

Despite the history of countries in the Americas breaking away from Spanish overlords, the U.S. has insisted on celebrating Hispanic Heritage Month opting to view the history and culture of people with roots in North and South America through a European frame of reference. Nearly two-thirds of the Latino population in the U.S. is of Mexican origin, yet the powers that be, including many in the Latino leadership class, continually label things that are so obviously Mexican, like feathered danzantes or mariachis as “Hispanic” for this government created celebratory month.

“We have leaders who want to use the people because almost 70 percent of this population is of Mexican heritage, yet you never hear the word Mexican,” said Rudy Acuña, historian and Professor Emeritus of Chicano Studies at California State University, Northridge. “Independence has become a Hispanic holiday when we fought against the Spaniards. This [Hispanic Heritage Month] is full of contradictions.”

If Hispanic Heritage Month starts on a day when countries were declaring independence, why would leaders in the U.S. want to tie the struggle to free people from an oppressive colonial experience back to the country doing the oppressing? Patriotic citizens of the U.S. would not like the Fourth of July to be labeled English or British. People of Mexican, Central American, and South American descent shouldn’t have to celebrate heritage that is tied to invaders and colonizers.

“The majority of the people that we call Hispanic or Latino in this country are Mexican and Central American; the majority of those people have Native roots. Between that and those who have an African culture, we’re not talking about people from Spain,” said Roberto Cintli Rodriguez, Associate Professor at the University of Arizona Mexican American Studies Department. “Hispanic Heritage Month is an imposition against people who have Native and African culture. To me, it’s very degrading. It seems like a holiday that would have been celebrated a hundred years ago.”

People with roots indigenous to the North and South American continent who the government and media label “Hispanic” or “Latino” often do have Spanish heritage to varying degrees, but a broad brush portrayal of diverse communities under the banner of “Hispanic Heritage” obscures complex histories. It erases the history of Africans who were brought to the Americas on Spanish slave ships and the diverse and complex societies that existed in North and South America prior to the arrival of the conquistadores.

It’s time to decolonize Hispanic Heritage Month or get rid of it. We don’t need gimmicky attempts to get us to vote with tacos and mariachis under the historically inaccurate Eurocentric frame of Hispanic heritage. Engage our communities regularly not just during election cycles, and respect our traditions and histories without attempting to define us by the language of our brutal colonizers. Do not suffocate the continued development and growth of our communities and movements because it’s politically expedient to put us in the Hispanic box.

The former School of the Americas in the U.S. has trained 4,211 Bolivian soldiers