Mexico-
México: Nochixtlán, The Toll of an Attack Denied by the Interior Ministry
3 July, 2016 by avispa in Mexico-
Spread the love 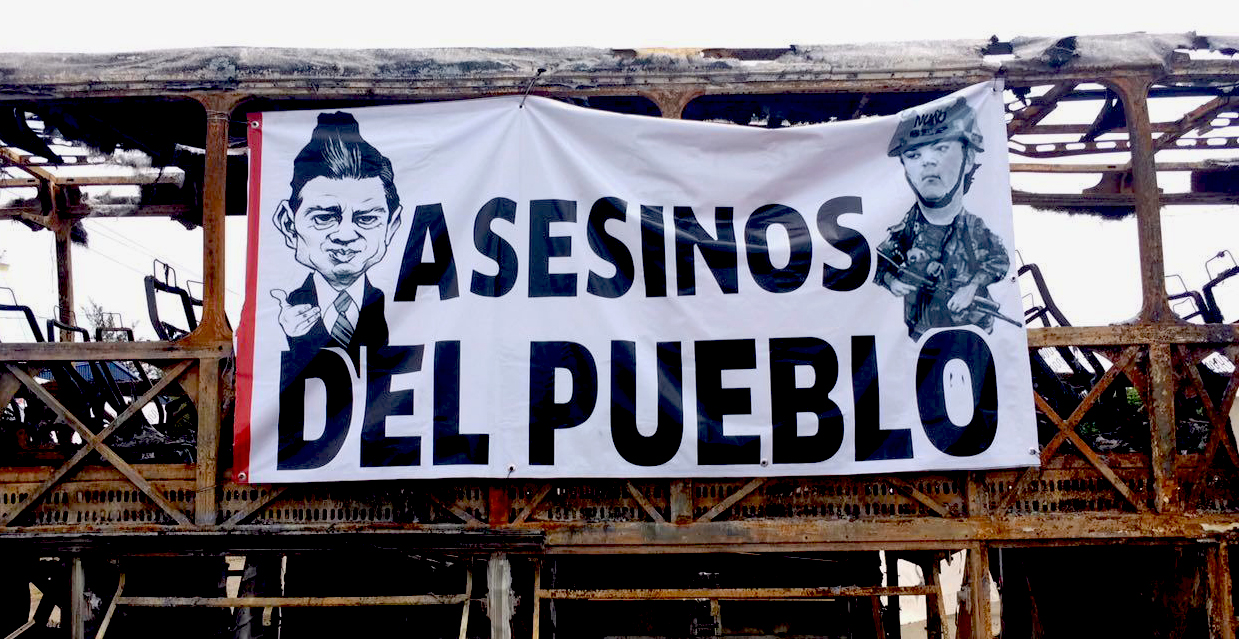 The morning of June 19, the Ministry of Public Security of Oaxaca (SSP-O) and the Federal Police (PF) perpetrated a coordinated attack to evict the highway blockade maintained by the students, teachers, and inhabitants of Nochixtlán. The result was 12 murdered, 27 arrested, 7 disappeared, and 45 injured, 37 by live ammunition from firearms.

AN ACT OF WAR THEY ARE TRYING TO HIDE

Faces illuminated by the heat of the barricade, which would later be deprived of life. Tense days in Nochixtlán. A tense calm. In the mornings, the cold is accompanied by coffee, bread, or atole, the result of collective organization. By night, military harassment and the absence of sleep, but also music and a determination to defend education.

To block the road only to police and transnational businesses was the agreement. After all, the blockade had been initiated to impede the flow of police who were intending to evict the encampment in the center of the city of Oaxaca.

In the collective imagination, an eviction or an attack similar to those that had come before was assumed – reason for staying alert – not a massacre, not an operation with helicopters, firearms, and police with the order to “shoot to kill.”

More than 800 members of the Federal Police arrived in Nochixtlán at 8am on June 19. The first attacks took place with tear gas and rubber bullets, but the Mixtec residents were able to repel them with clubs, rocks, and the defining feature running through their veins: Oaxacan resistance.

The first injury by firearm was the sign that the police were carrying guns and had complete permission to fire them. “They’re shooting bullets, man,” shouted a resident while guiding the first of the wounded, who later would be added as one of the 12 killed, a massacre they try to undermine, a massacre denied even as the proof is there, despite the dead that are there. A massacre that would not appear in the “official truth,” that which is so full of lies and contradictions.

A FACE, A LIFE SNATCHED AWAY, A NAME WORTHY OF BEING SPOKEN

The hours passed. The attack seemed to be endless. Slowly, a few at a time, the bodies were falling. “There go two more, they’re killing us,” announced a mother. The number increased along with the uncertainty. No one knew the exact number of dead for almost the entire day. They suspected six. The first images began to circulate on social media. Mixtecs whose lives were snatched away by the state exposed in photographs that similarly took away pieces of their dignity.

Ten fell on the day of the attack:

Andrés Aguilar Sanabria was 23 years old and taught indigenous education in his community. A bullet ended his life.

Yalid Jiménez Santiago was 29 years old, father of a family, originally from Santa María Apazco, Nochixtlán. The church bells rang as a call for help at the barricades. Yalid responded to the call, and was driving his truck there when the Federal Police opened fire.

Anselmo Cruz Aquino was 33 years old, in his free time he went around the Mixteca region and enjoyed riding his motorcycle. He worked as a shopkeeper in Santiago Amatlán.

Jesús Cadena Sánchez Meza was 19 years old. He was a student in Asunción Nochixtlán. He was killed by gunfire.

Oscar Nicolás Santiago was 22 years old. He was a campesino originally from the municipality of Santiago de las Flores Tilantongo. Member of the National Coordinator of Education Workers (CNTE). He was wounded during the attack by a .38 caliber pistol. He was denied medical attention at the Nochixtlán hospital, as the police took over the place for hours. He died due to hemorrhaging caused by a bullet.

Iralvin Jiménez Santiago was 29 years old. He was a health counselor from Santa María Apaxco.

Omar González Santiago, 22 years of age, an employee of the municipality of Tlaxiaco.

After the attack in Nochixtlán, in Hacienda Blanca, helicopters fired tear gas grenades for more than two hours. A fatal environment, one in which Azarel Galán Mendoza, a young, 18-year-old mechanic was killed by the Federal Police when a bullet pierced his chest near the Viguera intersection.

César Hernández Santiago was 19 years old. He was wounded by Federal Police gunfire in Nochixtlán and later transported to Huajuapan. He died in the city’s hospital.

“We want a cleaned out Nochixtlán. We don’t want murderers like those they sent who came and killed our loved ones,” said the father of Yalid Jiménez Santiago. The caskets of the fallen are in the city center of Oaxaca breathing out atmosphere of indignation and fury. Hundreds of people shout “Murderers!”

Oscar’s father said that his only objective was to defend public education for his children. “We want to raise a new generation of children that know how to express themselves and defend their rights. They want to silence us with machine guns, their parents will be remembered by history,” he concluded.

The day has ended, but for the families the pain of knowing that the state had taken their loved ones had only just begun. A girl cried, grasping the coffin where the body of her murdered father rested. Her father who sought a just education for her, a future. Who will offer her justice? Who will return her father to her? Her father who should have died of old age, with a cane in his hand, with gray hair, wrinkles accompanying his smile when he returns home in the afternoon, or when he announces “we won the battle against the goddamn state.”

“They told us that if they disappeared and burned 43, what couldn’t they do to us?” recounted Oscar Bautista Sarmiento after leaving the State Police headquarters in Santa María Coyotepec. Twenty-seven of the arrested were released late in the day on June 21, after more than 24 hours imprisoned, accused of resisting arrest.

In the afternoon three highway blockades are erected in Oaxaca: Isthmus of Tehuantepec, Tuxtepec, and the city of Oaxaca outside of the Oaxaca State Institute of Public Education (IEEPO). Federal forces arrived at nightfall and evict the teachers of the third blockade, firing tear gas and beating them.

June 13: The highway blockade in Nochixtlán put in place to impede 12 trucks of Federal Police heading to evict the encampment in the city of Oaxaca.

June 14: In the first minutes of the day, 13 barricades burn at different locations in the city of Oaxaca. At this point it is no longer just the teachers union, as residents, teachers, students join and a Parents Committee is created.

June 16: Federal forces, military police, and the army arrive at Tequisistlan (Matías Romero) and evict the blockade with tear gas and rubber bullets. The residents put it in place again.

June 17: Federal Police attack the blockade at Zanacatepec (Isthmus of Tehuantepec). They use tear gas, rubber bullets, and two helicopters. The blockade is reinstalled.

June 18: Federal Police attack the CNTE’s blockade at Salina Cruz (Isthmus of Tehuantepec). The resistance is able to force the police to retrea