US
Response to North Dakota Law Enforcement Press Conference on December 3rd
5 December, 2016 by avispa in US
Spread the love 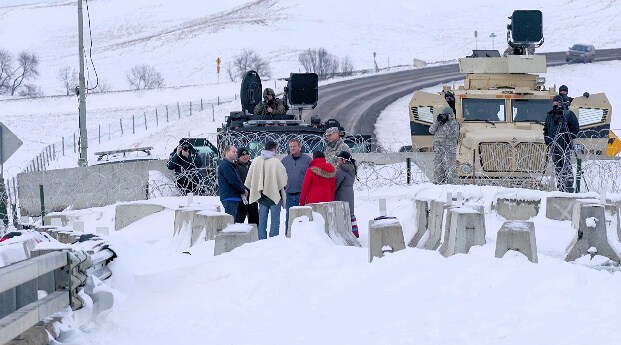 Cannon Ball, ND – On December 2nd, North Dakota Law Enforcement and the National Guard held a press conference to clarify law enforcement’s intentions for December 5th, the day the Army Corps planned to close all lands north of the Cannon Ball River to the general public. Law enforcement also commented on a meeting that took place on December 1st between North Dakota law enforcement, Veterans and Indigenous leaders on the Back Water Bridge, where the state of North Dakota has placed a barricade blocking highway 1806.

The following are statements from Veterans and camp organizer who met law enforcement:

“I’m disappointed because I asked the Sheriff’s Rep, 3 times, ‘can you tell us who these supposed troublemakers are, who are making supposed threats?’ I asked him to give us names and he said that they were on  Facebook and Twitter so he obviously saw them. So then I asked him why don’t you tell us who they are because they  must know what their names and what they look like and he never answered.” – Wesley Clark Jr., the organizer of Veterans Stand with Standing Rock

“On December 1st, I spoke with law enforcement and others about the barricade and the sacred sites that have been desecrated by the Dakota Access Pipeline. We asked that they remove the barricade because there have been emergencies and we need access to the highway. We have a right to use 1806 highway. In addition, I explained that the reason why we have been trying to reclaim Turtle Hill is because our relatives and leaders are buried on that hill. I said, ‘destroying our sacred burial sites is like someone going through Arlington National Cemetery and digging up all those grave sites’. We would never desecrate veteran’s grave sites, out of respect. North Dakota law enforcement  needs to show Indigenous Peoples the same respect and move off of Turtle Hill.” – Brenda White Bull , Veteran and descendant of Chief Sitting Bull.

“This movement has never been about North Dakota law enforcement or about attacking the police and we have never done that.  The only times there have been confrontation is when they confront us and forcibly remove us from unceded treaty lands by using war weapons against unarmed Water Protectors. Law enforcement has stated that there are known infiltrators in our camp but refuse to tell us who they are. This is counterproductive to de-escalating the situation as we cannot work to remove these individuals from camp. Furthermore law enforcement has agreed to move the barricade back as long as we comply with their requests to stay off the bridge. This accomplishes nothing besides setting up a trap that entices potential infiltrators or aggressors to go on the bridge. Taxpayers continue to pay for the police force and Army National Guard to protect the Dakota Access Pipeline. It would be fine if the law enforcement would operate within the laws and hold this company accountable for their countless violations and attacks on us but instead they continue to protect a private corporation.” – Kandi Mossett, Indigenous Environmental Network.