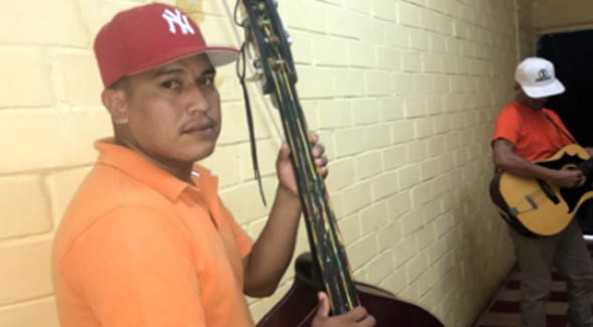 This audio comes from Maria del Carmen García Vázquez, the partner of
Indigenous Yaqui land defender and political prisoner, Fidencio Aldama Pérez.
It speaks to the context of Fidencio’s arrest, his current legal situation and
the necessity of solidarity in helping free Fidencio Aldama Pérez. The text of
the audio in both English and Spanish are below.

On October 21st, Yaquis from the eight Yaqui towns arrived in our community. These Yaquis receive money and new cars from the government and from the pipeline company, Sempra Energy. These Yaquis came to attack our traditional guard, and to attack our community, as a means to impose their authority and move forward with the gas pipeline project. For unknown reasons, we as Yaquis and as Catholics, we say it is metaphysical; that day October 21st, they arrived and attacked our traditional guard and our community. Unfortunately, in that conflict, Cruz Huitimea Piña was shot and killed. As the result of bad luck, or due to destiny, Fidencio Aldama Pérez was accused of the murder. That day Fidencio Aldama Pérez was working as part of the traditional guard, what they call community security or community police in other Indigenous communities. He had a 45-caliber weapon. Cruz was assassinated with a 22-caliber weapon. You all can see the difference there. Fidencio had a 45-caliber weapon and Cruz was killed with a 22-caliber weapon.

On October 27th, 2016, a week after, or six days after, the prosecutor’s office asked our Indigenous authorities permission to interview or take statements from the people that were there part of the traditional guard the day of the conflict. They asked to speak with Fidencio. At the moment Fidencio got into the automobile, darkness took over. They took Fidencio, alongside the compañera, Anabella Carlon, and a lawyer named Merardo, to Obregon. There he was taken to the attorney general’s office, where they made him sign papers and where he was given an arrest warrant. At that moment, Fidencio said he wondered why his arrest warrant wasn’t given to him in front of the traditional guard, in front of the traditional authorities and the people of the community. He asked why he had to sign the papers. The investigating state police told him that everything would be fine. He thus signed because he didn’t have any other option.

After Fidencio signed the paperwork, he was taken to prison in Ciudad Obregon. Since October 27th, he has been there, deprived of his freedom, innocent. After four months, Fidencio had a hearing. There, witnesses were present who said he is guilty. A year later, the trial was held. During the trial, the witnesses they brought forward were people they had paid off. They were the same people who arrived and attacked our town on October 21st. They brought these witnesses as a means to keep Fidencio in prison. This would help to pressure the authorities to sign the passage of the gas pipeline. Fidencio was eventually sentenced to fifteen years and six months in prison.

Fidencio remains in prison. His words support and nourish us. He tells us to stay together, to continue fighting for our territory. He says if he has to be there imprisoned, that is not important. What is important is that we continue the struggle. However, there are days that he says to me, when I talk to him or visit him in prison, he says to me that he can’t continue there, that he doesn’t want to be there. “I want to leave, I want to be with my children. I want to be in my home,” he says. I want this all to end, but what can I do. All of this makes me very sad, but I can’t do anything.

Right now the lawyer, David Guadalupe Valenzuela, has submitted an appeal in the Court of Hermosillo, Sonora. They have three months or ninety days to resolve the appeal. Those three months end in June. Supposedly the lawyer also went to talk with the federal government—with the secretary of government—because there was the possibility of the Senator Nestora Salgado helping release political prisoners. However, it turned out that the case of Fidencio is in the hands of the Ministry of Interior Affairs; they have the case of Fidencio.

I only ask those that listen to this audio, that you help me to get Fidencio free. If you can share this audio, or if you can help us with this struggle, I would be so grateful.

His children need a father. The pain is so powerful that sometimes it is impossible to endure. Either way, we are here and we continue the struggle. Thank you all for the support and hopefully you can share this audio to help free Fidencio Aldama. I send you all greetings and blessings.