The military industry’s shameless business in the border wars

A report by the Transnational Institute, a research body based in the Netherlands, implicates weapons and biometric security manufacturers in particular who have benefited from the crisis: first feeding repression and conflict in these countries and, later, obtaining multimillion-dollar contracts to provide border surveillance equipment and technology. “The companies benefit from both sides of the refugee tragedy. The companies create the crisis and then benefit from it”, says Nick Buxton of the Transnational Institute.

The measures taken to block a migration route forces people to take more dangerous routes. According to the report, in 2017, one out of every 57 migrants who crossed the Mediterranean died; while in 2015, one out of every 257 lost their life. The Transnational Institute notes this reflects the fact that, in 2017, the Central Mediterranean route – the longest and most dangerous – was the main route for displaced persons, primarily coming from East and Sub-Saharan Africa. In 2015, the main route was from Turkey to Greece, mainly used by Syrians.

According to the report, arms manufacturers such as Airbus (trans-European), Finmeccanica (Italy), Thales (France), and Safran (France), are among the large companies in the European border security complex. Indra (Spain), Finmeccanica, Thales, and Airbus are leading players in the EU’s security business as well as three of the four main European arms merchants, including sales to countries in the Middle East and North Africa.

Global arms exports to the Middle East have increased by 61% between 2006-2010 and 2011-2015, according to the report. From 2007 to 2016, the total number of permits issued by EU member states for the export of arms to 35 countries (with which the EU has security agreements and that have been pressured to increase their border security capabilities) exceeded 122 billion euros. More than 20% of these countries (7) are under an UN or EU arms embargo, but most of them still receive weapons from some EU member states, as well as migration-related support for their armed forces and security bodies from the EU itself.

The border security market is booming as well. According to the report, it was estimated to be at some 15 billion euros in 2015 and is expected to increase to more than 29 billion euros annually in 2022. The budget for Frontex, the main European border control agency, increased by 3,688% between 2005 and 2016 (from 6.3 million euros to 238.7 million).

There are also several semi-public companies and international organizations offering consulting, training, and border security management that have prospered alongside the enormous growth of the border security market. Among them are the French semi-public company Civipol, the International Organization for Migration (IOM), and the International Centre for Migration Policy Development (ICMPD). In part, Civipol is owned by large arms manufacturers such as Thales, Airbus, and Safran. In 2003, it drafted a very influential consultancy report for the European Commission that laid the foundations for the current border externalization measures which it is now benefiting from.

Additionally, the arms and security industries have received 316 million euros in funding for research on security issues, allowing them to set the research and development agenda. Often, they are benefitting from the resulting contracts. Since 2002, the EU has financed 56 projects in the field of security and border control.

The Middle East and North Africa continue to be sites of widespread conflict, violence, and human rights violations. The wars in Syria and Yemen are escalating. There are continuous conflicts in Afghanistan, Iraq, Turkey, and Libya. Dictatorial regimes rule in Eritrea, Egypt, and Saudi Arabia. And there are the occupations of the Palestinian Territories by Israel and of Western Sahara by Morocco.

According to data from the Stockholm International Peace Research Institute (SIPRI), in 2015, Egypt, the United Arab Emirates, Iraq, Qatar, Algeria, Israel, and Turkey were among the top 20 arms importers in the world. The list was led by Saudi Arabia, which has no difficulty acquiring arms despite its atrocious war crimes in Yemen or its participation as a weapons supplier in the war in Syria.

Buxton reports that the arms and security industries have influenced European border security policies through lobbying, their frequent interactions with EU institutions specializing in borders, and their decisive role in research policy. The European Organization for Security (EOS), of which Thales, Finmeccanica, and Airbus are a part, has been very active in defending increased border security. Many of its proposals, such as the creation of a pan-European border security agency, have ended up becoming actual policy.

“These companies are in the halls of power in Washington, in Brussels. They are assisting in the planning of migration policies and defending a militarized security response as the solution to the ‘problem’ of migration. And they offer themselves as the ones who can provide the goods to control the flows,”

The report criticizes that “evidence shows a growing confluence of interests between European political leaders seeking to militarize the border and the main defense and security contractors providing the services; yet this is not only a question of a conflict of interest or that some actors are benefiting from the crisis, but also concerns the course Europe is taking at this critical moment.”

Extension of the Border

The European Union exerts the same pressure on its neighbors as the United States exerts on Mexico, according to Buxton. “They have agreements with more than 35 surrounding countries, exporting the same border model. The same companies militarizing the European Union’s borders are also militarizing the borders of countries such as Morocco, Libya, Algeria. This is a global system. They are exporting this model to the surrounding area and, little by little, around the world,” he explains.

The report warns that the vast majority of the 35 countries the EU prioritizes for border externalization are authoritarian, known for committing human rights abuses, and with deficient human development indicators.

Since 1992, and even more aggressively since 2005, the EU has developed policies to externalize Europe’s borders so that forcefully displaced persons do not even reach them. This involves agreements with countries neighboring Europe to accept deported people, adopt the same border control policies as Europe, improve the tracking of individuals, and to fortify borders. In other words, these agreements have turned Europe’s neighbors into Europe’s new border guards. And as they are far from the European coast and media, the consequences are practically invisible to European citizens.

Furthermore, according to the report, there is a growing presence of European military and security forces in charge of border security in third countries. Stopping immigration has become a priority for ongoing Common Security and Defense Policy (CSDP) missions in Mali and Niger. Member states, such as France and Italy, have begun to deploy troops in Libya and Niger. 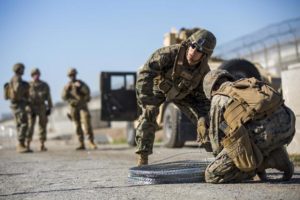 Buxton notes that it’s important to highlight the role of Israel. Israeli companies are the only non-European companies to receive research funds, based on a 1996 agreement between Israel and the EU. These businesses also have a unique sales strategy, taking advantage of their participation in Israeli border security, including the separation wall in the West Bank and the border fence with Egypt.

In general, the equipment and technology coming from Israeli arms and security companies are internationally acclaimed as they are considered to be “battle tested.” “They have the experience of controlling Palestinians. For some time, they have had walls and all the infrastructure of control. They sell their capabilities and technologies by advertising this experience”, says Buxton.

Additionally, some arms companies are not just involved in the process of preventing immigrants from reaching Europe. According to the report, some benefit from the detention of refugees. One example is the British company Serco, known for managing the United Kingdom’s nuclear weapons, which, in 2014, was chosen to manage the Yarl’s Wood detention center. The seven-year contract (2014-2021) is worth 70 million pounds.

Another example is the multinational security company G4S. This company used to carry out deportations from the United Kingdom until three of its security guards were accused of killing Jimmy Mubenga on a flight to Angola. They were later acquitted of the homicide in a verdict criticized by several human rights groups.

However, the report notes, G4S still manages detention centers in the UK and provides prison guards and other services to similar centers in Austria, Estonia, and Norway.

Almost half a million hectares in Mexico's most biodiverse region are slated for mining.
Mexico

United States and Mexico revamp objectives of the Merida Initiative

11 areas of coordination, 26 joint objectives, and 102 actions of cooperation, which have been approved between the United States and Mexico
Mexico

Zapatistas Celebrate 29-Year Anniversary with Emphasis on the Youth

In celebration of the indigenous uprising, the fourth generation of Zapatista members celebrated the memory of the founders of the EZLN