US
The US Southern Command’s Silent Occupation of the Amazon
14 November, 2017 by Avispa in US
Spread the love 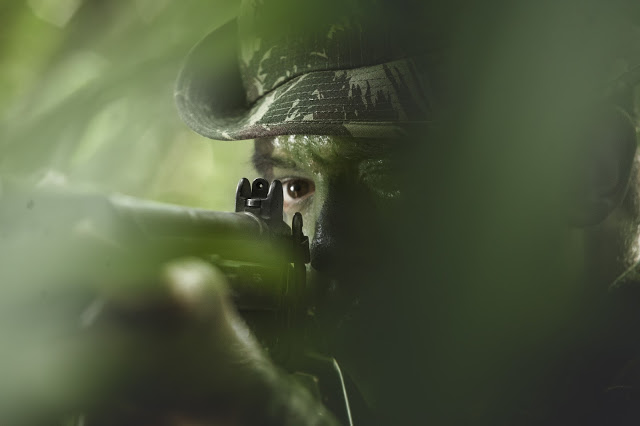 Brazil, Colombia and Peru share a triple borderland separating north from south on the South American continent. Located deep in the Amazon forest, this is the theater of operations in which more than 30 military companies test their services and merchandise. The multinational military exercise known as AmazonLog2017, is organized by the Armed Forces of Brazil. More than 1,500 members of the Brazilian military and military members from invited countries participated with high-caliber weapons and munitions, boats, aircraft, helicopters, information technologies, nautical and energy intelligent equipment, radars and sensors. The Southern Command of the United States — the Unified Combatant Command of the United States Department of Defense with influence in the Caribbean, Central and South America — is also an AmazonLog2017 participant.

Activists and researchers are alarmed about this military exercise. According to Mexican economist and geopolitical specialist Ana Esther Ceceña, AmazonLog2017 allows “the placement of troops that facilitate specific territorial incursions and rapid response operations, both of which imply the use of special forces, whether those be US forces, local or private on the triple borderland.”

While the exercise involves temporary military drills, many fear that it welcomes larger future operations. According to Ceceña, AmazonLog2017 creates the conditions to allow future military operations of US troops, specifically in two strategic areas: the lower part of Venezuela and along the Atlantic coast, where Brazil will allow the US access to the Alcȃntara military base.

The AmazonLog2017 military actions were planned in three phases. The first, the industry’s commercial phase, occurred between August 28 and September 1, 2017, in Manaus, the capital of the state of Amazonas. Two thousand personnel participated in this event, which was comprised of military, government agencies and arms industry corporations.

Between September 26-28, the second phase took place, focusing on ground operations organization. This phase consisted of the Humanitarian Logistics Symposium in conjunction with the Military Employee Materials Exposition and preparatory activities for the triple borderland military drills.

In the third, most important phase, the businesses will exhibit and test their products in jungle-based tactical humanitarian and war drills along the triple borderland with the Multinational Logistics Drill. This phase is scheduled for November 6-13, 2017. More than 1,500 people are expected to participate, including military personnel and arms industry agencies from Brazil, the US and other countries.

“This exercise will bring a series of improvements in the logistics of the western Amazon […] we are developing a humanitarian aid doctrine of exchange between neighboring countries of interoperability between armed forces and civil agencies,” said Theophilo Gaspar de Oliveira, general of the Brazilian Army. He is responsible for the logistical command of AmazonLog2017 and recently headed the negotiations between Brazil and the United States for the acquisition of four C-23 Sherpa aircraft in July 2017.

See also: US Intervention in Mexico and Central America: The Continuation of a War Economy

In order to concentrate the logistical teams, the Brazilian government created conditions for mounting a provisional logistical base in the Tabatinga Municipality in the Amazon State. There, armed forces were concentrated from 16 countries, including Germany, Canada, Chile, the United Kingdom, Japan and Israel, as well as observers from the Inter-American Defense Board, the Conference of American Armies and the Council of South American Defense.

Despite its military nature and origins, much of the publicity around the AmazonLog2017 exercises has centered on hypothetical benefits for civilians. In a press conference, General Racine Lima, the coordinator of AmazonLog2017, argued that the army would be focused principally on training to support peace operations and humanitarian aid. Lima mentioned that the upcoming exercises would also support the creation of the Tabatinga Integrated Multinational Logistics Base, which will serve as the provisional base during the military exercises.

AmazonLog2017 organizers took advantage of the military exercise to make infrastructure improvements that permit massive troop movements in remote Amazon locations. Smart energy grids, communication, water purification systems have been installed as well. For example, as part of these drill preparations, $15.8 million was invested in the micro-region of Río Alto Solimões, in the Brazilian state of Amazonas, to create docking terminals.

Behind the humanitarian discourse, it appears that the organizers of AmazonLog2017 chose the theater of operations for this multinational military exercise very strategically, to pursue natural resource extraction that threatens the territories of more than 300 Indigenous communities.

“As Pueblos of the Colombian Amazon, we do not have information about this exercise,” said Álvaro Piranga Cruz, a communication adviser for the National Indigenous Organization of Colombia. “But we do know that there are vested interests in all of the Amazon. Interests of petroleum, mining and carbon-trading-based megaprojects. They come to deceive our Pueblos with environmental conservation projects, and we do not know [what] this implies. For example, there are mining agencies that are conducting seismic studies in our territories without anyone’s consent.”

According to a 2012 report from the Amazonian Network of Georeferenced Socio-Environmental Information, within the larger Amazon region, there are more than 327 plots of land designated for petroleum extraction, comprising 14 percent of the land in the Amazon.

The report notes that the Amazon countries most affected by petroleum extraction are Peru, Colombia, Brazil and Ecuador and further notes that “The mining zones occupy, today, 15% of Natural Protected Areas and 19% of indigenous territories in the Amazon.”

In February 2017 the Peruvian government announced the Peru-Petro reform based on the three pillars of new contracting models, incentive structures and a national hydrocarbon plan. “This triple strategy seeks to attract investment in both the exploration and exploitation phases of petroleum developments,” said Alvaro Ríos, the managing partner of the consulting firm Gas Energy Latin America. “The principal corporate investors are Shell, Chevron, Total and the China National Petroleum Corporation,” noted Ríos.

But not everyone in Peru is seeing the benefits promised by the industry. “Petroleum activity has not brought us development; on the contrary, our lands and territory are contaminated and our subsistence resources are as well,” argue the Peruvian Quechua, Achuar and Kichwa Pueblos in an October 2017 press release made by Pueblo traditional leaders. These groups have indicated their intent to maintain resistance against oil-based extractivism in the region. 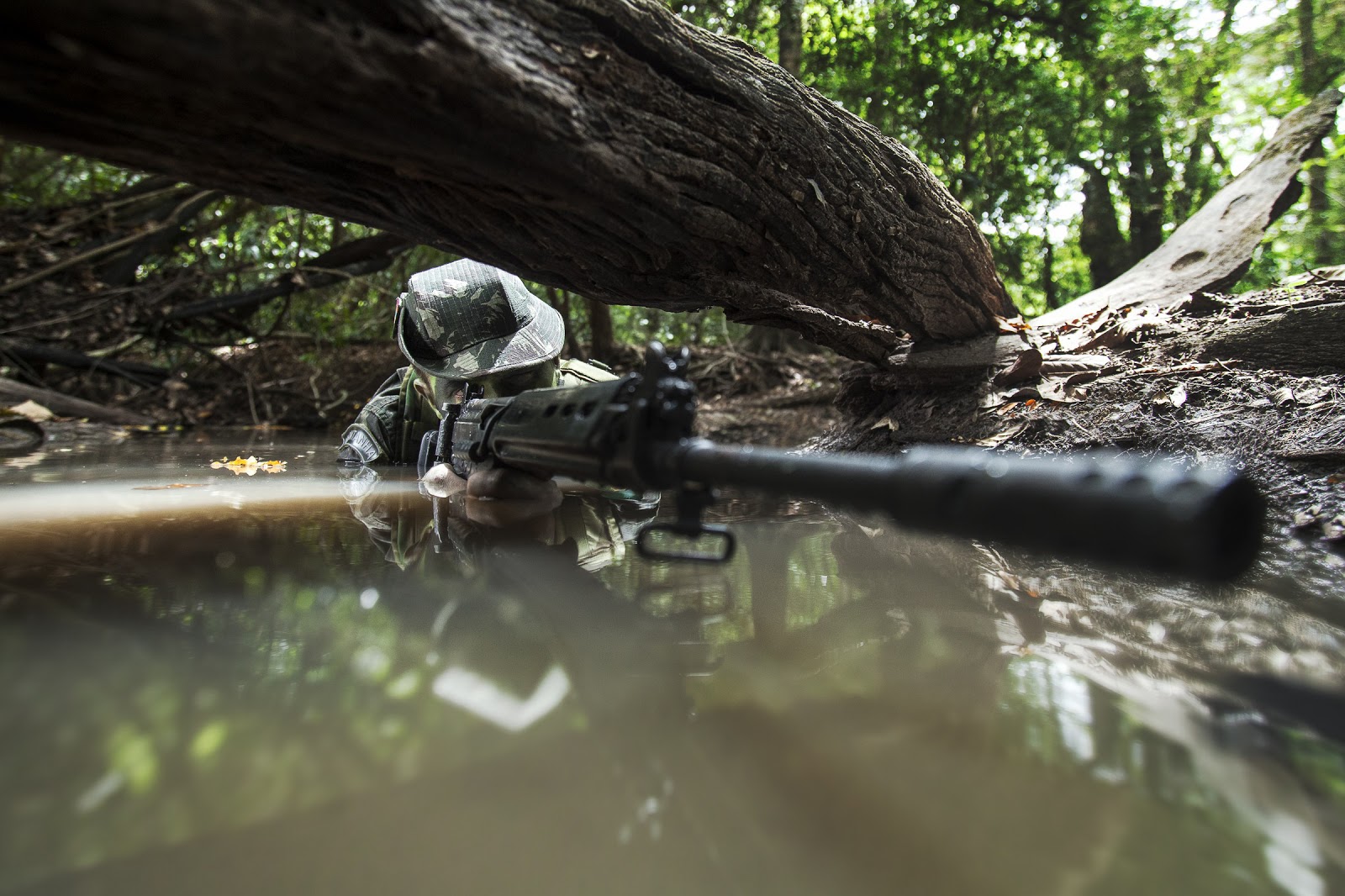 The Amazon region is composed of 7.4 million square kilometers and inhabited by 33 million people, including 385 Indigenous Pueblos of diverse ethnic backgrounds. Some of these groups have been living in isolation, meaning that for generations, they have maintained themselves deep within the Amazon forest without any outside contact. These areas have been considered inaccessible until now and are of great interest to the Brazilian military.

The Indigenous Missionary Council (CIMI, from its Portuguese acronym) documented the murder of at least 118 Indigenous persons in 2016 and 137 in 2015.

According to data from a 2016 CIMI report, the greatest number of victims lived in the Brazilian Amazon state of Roraima, where there were more than 100 murders of primarily Yanomami Indigenous persons between 2015 through the beginning of 2017.

The governmental organization representing the rights of Indigenous peoples in Brazil, the National Indian Foundation (FUNAI, from its Portuguese acronym), has been a participant in the events of AmazonLog2017. This may seem odd; however, it is less odd when one considers that Franklimberg Ribeiro de Freitas, the current head of FUNAI, previously served as the adviser on institutional relations in the Amazon Military Command.

Truthout reached out to FUNAI to clarify its role within AmazonLog2017 and the vulnerability of Indigenous peoples in the region, but FUNAI did not respond to comment at the time of publication.

The Brazilian Institute of Environment and Renewable Natural Resources and the Chico Mendes Institute for Biodiversity Conservation participated in the events of AmazonLog2017, serving as mediators between the government and corporations in order to foster the development and incursion of megaprojects in Indigenous territories.

Military Agreement With the United States

As Brazilian society is experiencing economic and political crises, the international military industry is taking advantage of the context of upheaval to test its equipment. Amazonlog2017 is a product of the arms industry and of powerful governments beyond Brazil, particularly the United States.

In 2016, the Brazilian Army signed an exchange agreement with the United States military. This agreement involves cooperation between US ground troops in joint maneuvers in 2017 and 2020. The two armies will end their activities in the United States at the Joint Readiness Training Center in Fort Polk, Louisiana.

Lieutenant Colonel Alexandre Amorim de Andrade, head of the training division at the Jungle Warfare Training Center, affirmed that the US military had begun to train in the Amazon. “Beginning in 2016, there was a specific training focused exclusively on foreigners: The International Practice in Jungle Operations. Now this practice is called the International Seminar of Jungle Operations, and the United States and Peru have confirmed the participation of their military,” said Amorim de Andrade.

Although Brazil has not declared war with another country for the last 100 years, its military has participated in UN peacekeeping operations. The current modernization program of the Brazilian Army is geared toward “non-conventional” warfare, including operations against “terrorism.”

“Humanitarian Aid” in the South

In 2010, after 30 years without an established military agreement, the US and Brazilian governments signed a military cooperation agreement, but the agreement did not authorize the use of bases or cession of rights of passage for US personnel. However, since President Michel Temer took office in 2016, the US has been given a wider berth in Brazil. The US Southern Command received the green light for more activities in Brazilian territory with the AmazonLog2017 exchange agreements and military exercises.

Before Temer took office, the groundwork was being laid for the Southern Command’s presence in the region. In 2013, representatives from the US Embassy and the regional government of Tacna, Peru, inaugurated the Regional Emergency Operations Center. The US government provided $600,000 “to support the Center as part of the Department of Defense Southern Command Humanitarian Assistance Program,” according to a press release from the US Embassy in Peru.

The US embassy noted that the Center was just one of the 15 Regional Emergency Operations Centers projected for Peru. The seven already-finished centers are located in Arequipa, Lambayeque, Pucallpa, Junín, Tacna, Tumbes and San Martín. Construction is also planned in Puno, Cuzco, de Huancavelica, La Libertad, Apurímac, Loreto, Ancash and Moquegua. In all, the US will provide more than $20 million for these projects, all part of the Southern Command Humanitarian Assistance Program.

“These Centers respond during times of natural disasters,” according to the embassy’s press release, and “they allow the integration of a complete range of public services required during an emergency, services like medical and public health services, police, firefighters, and military personnel.” However, member organizations of the Campaña Continental América Latina y el Caribe, which promotes regional peace, declared in a press release that “behind these compounds financed by the Southern Command exists a process of regional occupation.”

On February 20, 2013, the Southern Command announced it would be opening another Emergency Operations Center, this one in Santa Rosa del Aguaray, in the state of San Pedro, Paraguay. The announcement was made by the director of planning for the Southern Command, George Ballance, after a meeting with Bernardino Soto Estigarribia, Paraguay’s defense minister,. These zones created by the Southern Command are in addition to the eight military bases already installed in Colombia.

For Marcelo Cero, a Brazilian sociologist and specialist in international relations, the objective of AmazonLog2017 is not simply to train troops to lead during humanitarian crises; it is to insert the Brazilian Armed Forces in the strategic orbit of the US, which has already taken steps to cooperate with Peru and Colombia. Furthermore, according to Cero, “The participating armies, without a doubt, will put pressure on Venezuela, a regime that opposes US interests in South America.”

“It is Chevron’s war, a war of coltan, of uranium, of thorium, of gas, and of gold,” Ceceña said. “It is a US war to bolster their material conditions and hegemonic position.” 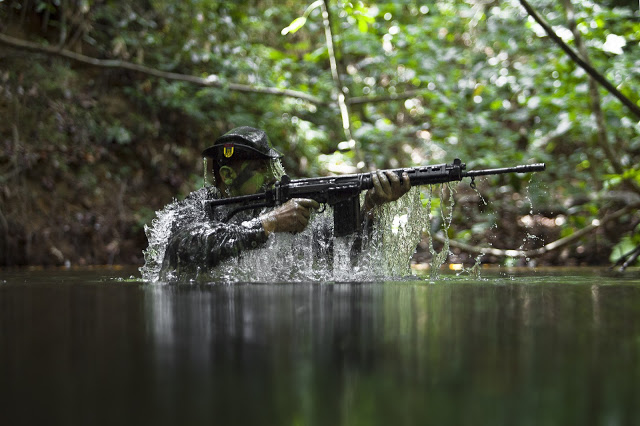