Translated by Ana Zavala and edited by Alessandro Morosin

Blockades took place in the principle cities of Honduras as part of a National Strike in response to the results of the November 26th election, where it appears Juan Orlando Hernandez is the winner for the second consecutive time. The objective of the protests is to prevent Hernandez from taking office on January 27th, and requesting for a new election to take place.

At the start of the National Strike, created by the Alianza de Oposición (Alliance of Opposition) against the dictatorship, a total of 38 protestors were killed by the police and military for protest activities over the past two months. On January 20th, in the city of Saba, Colon, in the northern area of Honduras, the state security forces killed 73-year-old Anselmo Villareal and injured Martir Ramirez.

“We condemn the assassination of Don Anselmo, a person who was simply fired at, going through Saba. This is the undeniable proof that the military is shooting to kill. A president cannot govern at the cost of deaths. Never!” stated the iconic Honduran social activist, Miriam Miranda, coordinator of the Organización Fraternal Negra de Honduras (OFRANEH) (Black Fraternal Organization of Honduras).

On the same day, a reporter from the Iranian channel HispanTV, Dassaev Aguilar Moncada, was also seriously injured, resulting in a fracture in his left leg while he was finishing his work on the closing of a public road in Tegucigalpa. A few days prior, Moncada had filed a lawsuit. “On Thursday we joined other reporters and we went to the human rights office to file a lawsuit against the government of Juan Orlando Hernandez for harassment, hate incitement and possible aggressions towards our lives. And today this happens. It was clearly an attack towards me because there were no protestors present,” said Moncada, referring to the moment in which he was fired at.

Read also---> US Intervention in Mexico and Central America: The Continuation of a War Economy

The strike is programmed to take place the 20th and 27th of January, where the general population, various organizations and human rights groups have come together. Even ex-president Manuel Zelaya, who was impeached for a coup d’état in the year 2009, came out to protest. “We call out to all the governments in the world, to the international organizations, to take interest in what is happening in Honduras. The democratic electoral systems are put at risk in all the countries of the world. Do not forget, Honduras is a political laboratory,” Miranda pointed out. 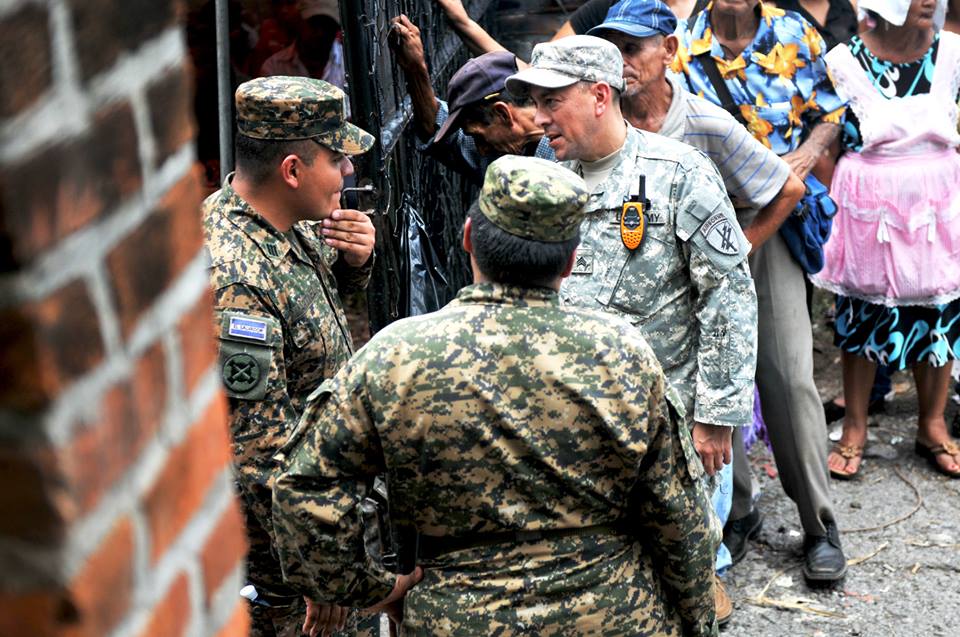 “We congratulate President Juan Orlando Hernandez on his victory on the November 26th presidential elections, according to the Tribunal Supremo Electoral (TSE) (Supreme Electoral Tribunal) of Honduras,” said the U.S. State Department through spokesperson Heather Nauert, long before the political situation of this country was defined.

The TSE declared that Hernandez obtained 42.95 percent while Salvador Nasralla had 41.24 percent of the votes in the Alianza de Oposición, and claimed there was fraud in the elections.

On the other hand, the Fuerza de Seguridad Interinstitucional Nacional (FUSINA) (National Inter-Institutional Security Force), in a talk with the press a day before the start of the strike, argued that they would commit to protecting the Estado de Derecho (State of Law). “It is the responsibility of the people who secure the state, to be active in maintaining order and guaranteeing the people the constitutional rights to free movement and travel throughout the national territory,” announced a member of the navy force, spokesperson for FUSINA.

FUSINA was created by President Hernandez on February 2014. It is an interinstitutional task force made up of members of the police, the military, the Attorney General and intelligent agencies. It is driven by the Honduran military and their mission is to fight against organized crime. “The institution’s job has been consolidating in the development of operations with inter-institutions”, said lieutenant colonel military justice of Honduras Santos Nolasco, spokesperson of FUSINA, in 2017. “Also, in support of these actions a new legislation has been created that will help implement justice more effectively”.

Meanwhile the spokesperson for the United Nations High Commissioner for Human Rights (UNHCR), Elizabeth Throssell, told the press that the Honduran government had been asked to abstain from sending military quotas to the opposition demonstrations. “We ask the Honduran authorities to avoid using the Military Police and armed forces to police demonstrations, functions for which they are neither effectively trained nor equipped,” advised Throssell.

There is a complicit silence on behalf of the United States authorities in regards to the military presence on the streets of this Central American country. The Honduran military not only carries equipment “donated” by the U.S. Government, but has also received U.S. training. Since the year 2016 the US Congress approved US$100 million to provide assistance, antinarcotic military training and border security for the countries of the northern triangle, Guatemala, Honduras and El Salvador. “A portion will also support military and police units engaged in public security, including support from U.S. Special Operations,” said the Washington Office on Latino-American affairs office (WOLA) in 2016.

FUSINA has received military training from the Southern Command of the United States. An example occurred in June 2017 at the center of naval training, located in the bay of Trujillo, where a group of 255 Honduran officials and sub officials received elite training, provided by specialized marine instructors from the U.S., Colombia and Chile.

“The objective of the training, besides elevating the operational readiness and training the personnel of the naval force to fight against drug trafficking and other illicit activities, it is to strengthen and adopt the elements in the marine infantry and the creation of a new and equipped force comparable to the army’s special forces,” declared by spokesperson of the military affairs Dialogo, Naval Captain (DEM) Hector Manuel Tercero Lopez, Chief of the Naval General Staff of Honduras.

It is worth noting that the U.S. installed at least 2 military bases in Honduras, Mosquita and Palmerola or Soto Cano. At the Soto Cano base, located in the valley of Comayagua, they operate with at least 600 United States soldiers that can be rapidly deployed for operations in the rest of Central and South America, controlled by the United States Southern Command. At this base they also receive training for the Fuerzas Especiales Navales (FEN) (Special Naval Forces) of Honduras working together with the Joint Task Force Bravo.

The South Command is one of the nine commands belonging to the United States. It embarks the south area of the American continent, Central America and the Caribbean, with headquarters in Miami, Florida.

The coup against president Manual Zelaya occurred early in the morning on June 28th, 2009, when he was kidnapped by the military dome and transferred from Costa Rica to the military base of Soto Cano. Enrique Reina, Zelaya’s ex-secretary, confirms that the U.S. was aware of the coup the entire time. “The Honduran military doesn’t do anything without the U.S. approval,” said Reina in an investigation published by The Intercept.

The coup was executed over a dispute between the National Congress, the Supreme Electoral Court of Honduras and the Supreme Court of Justice, over the legality of the cuarta urna (Honduran fourth ballot box). Zelaya proposed voting on a referendum and changing the constitution by constituent assembly. Months after the coup, a democratic drama had been created to elect Porfirio Lobo from the National Party, subsequently succeeded by Hernandez, who has always depended on the support of the U.S. government.

Guatemala: Carbon, the Metric of Displacement in Petén

The commercial architecture of conservation in Petén

False solutions, such as carbon markets and Nature Based Solutions, prosper as threats and violence increase in the Brazilian Amazon
Mexico

“I can say that important investments are coming in for the Interoceanic Corridor, we already have more than 200 million dollars in place…. The Corridor is being called upon to be the great engine of growth in Mexico.”