Mexico: Indigenous people who kicked a mine out of their territory celebrate five years of daily struggle

Justino García is a youth from Magdalena Teitipac. When a mining company called “Plata Real” (a subsidiary of Sunshine Silver Mining, based in the United States) arrived in his community, he was only five years old. Now he’s 12 and he’s made it his responsibility to defend his territory from mining. He’s part of the community radio station “Teitiradio Lobadani”, which means “Root of the Hill” in Zapotec. This radio station was built as a necessary part of the defense against mining. Today, resistance is an everyday thing.

The boy says that since he was five, he has held onto the memories of when the mining company tried to descend upon his community. “My siblings, my friends, and I were afraid because they arrived on the hills in helicopters. Now, seven years later, we’re not afraid of them anymore, because we don’t want the foreigners to come and exploit our lands”, states the young radio announcer, better known as “el tigrillo” [the little tiger].

Magdalena Teitipac is a Zapotec pueblo located in the Central Valleys region of the state of Oaxaca. This community is organized under its own system of rules, the general assembly being the highest authority. Land ownership in Teitipac is communal; in 1975 this was recognized by presidential resolution as the Communal Property of Magdalena Teitipac. A large portion of the population works in agriculture: “We’re peasants; we depend on the land”, shares Mr. Fernando Martínez, a local from this Zapotec village.

The expulsion of the company

On September 6, 2007, the General Directorate of Mining Regulation granted mining concession number 230489, called “El Doctor,” to Plata Real for exploitation. The company was seeking to extract gold and silver from a surface area of 9,652 hectares [about 24,000 acres] of Magdalena Teitipac’s communal lands. “We were not informed about this decision; we didn’t know that our lands had been handed over”, denounced Martínez.

In the beginning of April, 2009, the Communal Property Commission of Magdalena Teitipac signed an agreement with the Plata Real mining company allowing them to carry out exploratory work, without the consent of the community assembly.

The commission’s actions generated discontent among the population. “In 2009, the commission’s term ended, but they didn’t want to leave. The people were already upset by everything they had done with the mining company without consulting the assembly, so they decided to remove them from their post in October 2010. This situation greatly affected our community organization”, says Fernando.

From April 2009 until July 2012, according to the testimony of residents, the mining company drilled 17 holes for mineral exploration in the communal territory of Magdalena Teitipac, each approximately 15 centimeters [6 inches] in diameter. One hole close to the Río Dulce contaminated the river, causing the death of livestock.“In 2011 we realized that the mining company’s work was contaminating the river, and so the community decided to kick out the mining company, because its work was killing the animals and polluting the water”, remembers Fernando.

The community went about organizing itself in community assemblies, in which they made their most important decisions. On February 23, 2013, they created the Committee for the Defense of the Territorial and Cultural Integrity of Magdalena Teitipac, which strengthened the resistance against the Plata Real mine. In July 2013, the community of Teitipac gathered in general assembly and resolved to expel the mining company from their lands. “By means of the community assembly, we formed a plan to close the road off from the mining company. When the company saw our strength they had to withdraw and they took their machinery with them. The pueblo was also left affected and damaged”, comments Fernando, who together with several of his comrades faced 3 made-up charges for defending his territory. That same year, on August 17, the town council session declared mining activity to be prohibited on the communal property of Magdalena Teitipac. 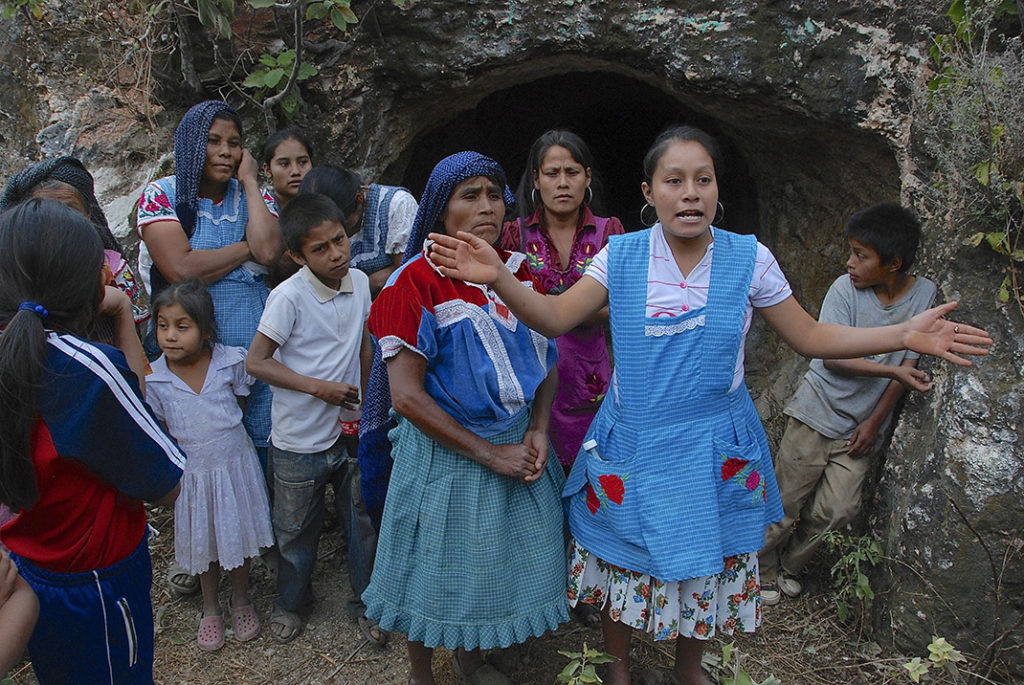 Now five years have passed since Magdalena Teitipac kicked the Plata Real mining company out of their territory and declared their lands free of all mining activity. In these five years they have been weaving strategies to keep defending their communal life. “The Territorial Defense Committee was born when the conflict with the mining company broke out. Up through today we continue in our plan of resistance. Our job is to keep defending the territory, and to preserve the indigenous language, because it’s a powerful weapon of resistance for aboriginal peoples”, Don Agustín López, member of the Territorial Defense Committee, tells Avispa Midia.

With the goal of continuing to defend the territory in the face of threats from mining projects in the Central Valleys region of Oaxaca, “On Friday, February 23, we are going to celebrate the five years we’ve been in resistance. In an open town council session, we’re going to confirm our territory as being free of mining, so that the government knows we’re still in struggle, we’re still in resistance here in Teitipac, and at the same time, we want to motivate other communities to weave alliances,” says the Territorial Defense Committee.

On February 23rd and 24th, the Agrarian and Municipal Authorities of Magdalena Teitipac, together with the Committee for the Defense of Territorial and Cultural Integrity and the Oaxacan Collective in Defense of Territory, organized the second “Here we say yes to life, no to mining” statewide encounter of pueblos, communities, and organizations.

This event, which was open to the general public, was divided over two days. The first was a celebration of the fifth anniversary of the “struggle against mining and in defense of Magdalena Teitipac’s Mother Earth.” On the second day, February 24, the “forum of pueblos, communities, and organizations to strengthen defense strategies” took place.

The hope was for social organizations and civil society collectives to show up to the event. They also made an open call to free and alternative media.

The forum entitled “Yes to life and No to mining” included other pueblos and communities from different Mexican states. The goal was to share experiences of resistance and struggle, such as the cases of the pueblos in the Guerrero mountains, the family members of the Pasta de Conchos miners, and pueblos in Chiapas who fight against mining. “The encounter is for sharing experience and making bonds between communities and organizations, to unite us under one single goal: defending our territory”, said Agustín López, a member of the Territorial Defense Committee.

The Oaxacan Collective in Defense of Territory, in the words of Neftalí Reyes, told Avispa Midia that this encounter had two pillars: “On the one hand, the anniversary of the struggle of Teitipac, which five years ago began a process of territorial defense, and on the other hand, the second pillar of the event is to reflect on and analyze the strategies that the mining companies are putting into place to exploit the Earth. This will help us, as pueblos from every corner of the state, to strengthen our resistance”.

Collectives in Europe prepare to welcome the Zapatista delegation

It was led by the US Ambassador to Mexico, Ken Salazar, together with representatives from the economic sector, such as Visa, Amazon, Facebook, AT&T, META, Google
U.S

False solutions, such as carbon markets and Nature Based Solutions, prosper as threats and violence increase in the Brazilian Amazon