Mexico: Real estate sector robs Zapotecs of their communal lands on the coast of Oaxaca

Overnight, the authorities responsible for carrying out justice in the area of agrarian rights in Mexico ignored the legal recognition of the communal lands of more than 70 indigenous Zapotec families on the coast of Oaxaca. At least one arrest warrant for each head of household has been issued, under the argument that they have stolen the land of two supposed small property owners. The region’s lands have been allocated for the construction of luxury tourist complexes.

Tilzapote is in the Municipality of Santa María Tonameca, District of Pochutla, Oaxaca. It has less than 300 inhabitants, who live off of the cultivation of corn, beans, peanuts, melon, watermelon, and hibiscus, as well as fishing. Their lands are communal and include deeds dating back to 1870. They’re also backed up by a resolution on the recognition and titling of communal lands in the town of San Francisco Cozoaltepec, located in the Municipality of Santa María Tonameca. This credits the Zapotecs as the legal, legitimate owners of these lands.

However, in 2008, two supposed owners of 300 hectares [741 acres]—Pedro Martínez Araiza and Domitila Guzmán Olivera—appeared out of nowhere. Strangely enough, no one in the community knows them.

“There are documents that date back to the time of the viceroyalty [translator’s note: historical period from 1535-1821] that give the community the right to the communal holdings of San Francisco Cozoaltepec. When the Ministry of Agrarian Reform incorporated these documents, which came from a presidential resolution, the Zapotecs got a 29,000 hectare [72,000 acre] plot. The supposed owners refute this presidential resolution, alleging that they hold private property enclosed within the communal lands of Cozoaltepec, specifically in Tilzapote. A surface area of 300 hectares [741 acres]”,

BEATRIZ RAMÍREZ HERNÁNDEZ TOLD AVISPA MIDIA. SHE IS A PRIVATE ATTORNEY WHO HAS GIVEN LEGAL COUNSEL TO THE INHABITANTS OF THIS COMMUNITY.

This year, the Agrarian Court ruled in favor of the supposed owners. The community found out from someone who introduced himself as Cruz Amador Martínez, sent by the Ministry of Agrarian, Territorial, and Urban Development (SEDATU). He notified them that beginning in October of this year, the clock would start ticking for them to move out of their houses. In exchange, he offered them relocation onto 10×30 meter [33×99 foot] lots. He also stated that if it became necessary, the state would turn to security forces. The residents of Tilzapote claim that there has been influence peddling and that politicians who have held federal government positions, like “Héctor Pablo Ramírez Puga, two-time federal representative, Gerardo Estrada, and Alfredo Ramírez Gómez, agrarian subdelegate”, have helped this process along.

“Tilzapote is considered one of Oaxaca’s most precious beaches, in the possession of Zapotec farmers. It’s the beauty of these beaches that has stirred up the greed of petty tyrants and individuals who are looking to take over these lands to build tourist parks”, Tilzapote’s lawyer Abram Cruz García told Avispa Midia. He has also served as spokesman of the journalists’ association of Oaxaca.

Dispossession of communal lands has become common in this southern Mexican state. These lands are an obstacle to foreign direct investment, but also to small and medium investment flows. Interests around industrial and tourist corridors have drastically increased the change in land use. At first, they try to convince or buy off local, traditional authorities, then they try to purchase influence, and finally, there is forced displacement.

“These injustices are the daily bread of life in Oaxaca. All over the state, indigenous people are stripped of their land, and the respective authorities are involved in it, because they are accomplices to these abuses and injustices that have spilled so much blood in the region. They’re using every single legal instrument to carry out this dispossession”, added Cruz. 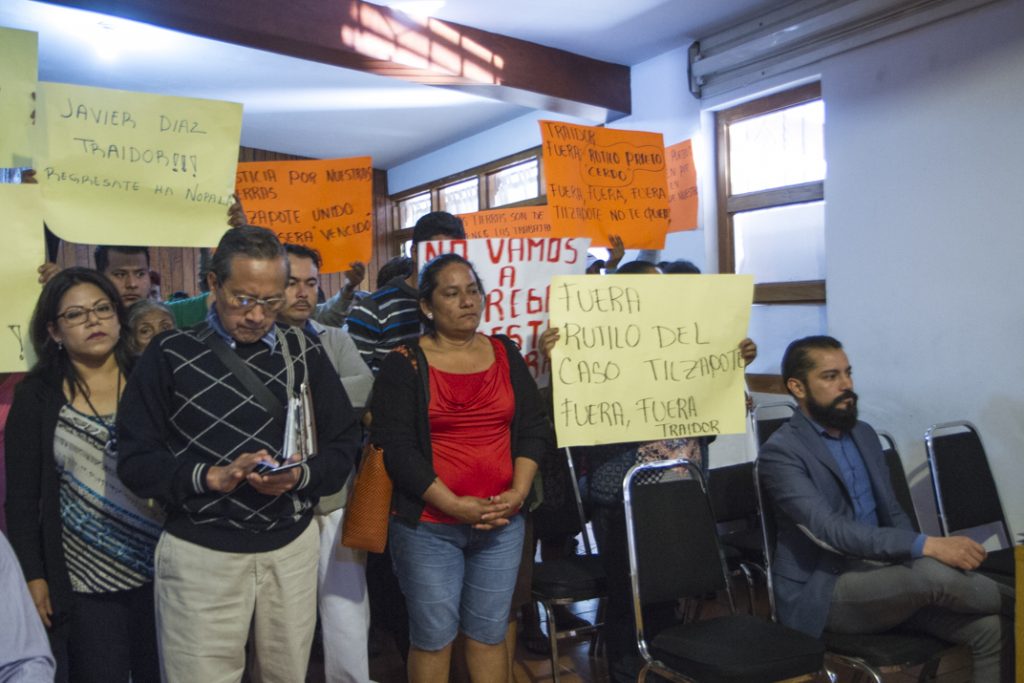 On December 8, 2017, residents of Tilzapote traveled towards the city of Oaxaca with banners denouncing the land grab. The objective was to participate in a public hearing in the Agrarian Court, where the legal representative of the supposed owners of the 300 hectares also appeared. In the end, the corresponding authorities didn’t show up and the hearing didn’t take place. “Now we have to wait for the resolution of two injunctions. One that the supposed owners of these properties filed, demanding that the decision be executed and as such, the removal of the inhabitants of Tilzapote. Another injunction on the part of the defense of the inhabitants of Tilzapote, where they demand that the documents dating back to the viceroyalty be respected”, stated Tequio Jurídico, an organization that has accompanied the community members in their case.

Underdevelopment in the South

María Luisa Santos Martínez is a woman of more than 70 years of age who has lived her whole life in Tilzapote. She is the living memory of this community that she knows like the palm of her hand. It’s almost certain that the supposed owners of this land don’t know even a millimeter of what she holds in her memories. She’s a grandmother of great courage, known for being fierce and tough in the defense of her ancestral territory.

Together with other members of her community, she was arrested in 2011, accused of aggravated land theft. She told Avispa Midia that “at first there was neither water nor a road in her community”, but today, they find themselves right next to one of the major coastal highways, number 200, through which a great quantity of tourists drive. “Everything started with that fucking highway. Lots of people from other places showed up like vultures wanting to buy our land. We don’t ask for anything from the government and they come to take away the little that we have. They talk about progress and jobs, but those are pure lies. We want our land”, says María.

Highway 200 is part of the Development Strategy of Southern Mexico, launched in 2015 by the President of Mexico, Enrique Peña Nieto. Under this strategy they announced a 450 million peso [$24 million USD] investment to propel the development of Chiapas, Guerrero, and Oaxaca. In these states the proposal is to set up a skilled labor force in the agro-industrial and tourism sectors, allocating a 127 million peso [$7 million USD] investment to grant training fellowships to 35,000 people, especially youth, who would specialize in hotel and restaurant work. A series of reforms, among them change in land use, was established to permit the investment.

Under article 41 of the Reform to the Organic Law of Federal Public Administration published on January 2, 2013 in the Official Journal of the Federation, the SEDATU, who gave the order to evict the inhabitants of Tilzapote, is responsible for handling—among other matters—the following:

“The underdevelopment of the South/Southeast in terms of economic growth and human progress is recognized, and we seek to integrate the states involved into national and global development. The nature of the indicated actions clearly shows that there is a strategy in mind whose core is economic development”,

Ramírez claims that there are already rumors of “a very large tourism and hotel construction project” in the area of Tilzapote’s beaches.

One example of the construction of these complexes is the already underway Conjunto Hornitos project, which will be built on the coast of Santa María Tonameca. It will consist of 14 luxury houses, a beach club, administrative offices, convenience stores, guardhouses, and a water treatment plant. The complex will cover 2.17 hectares [5.36 acres]. It’s an example of how real estate speculation has begun to move forward in the region. There’s no doubt that at some point, the land grabs will get worse. 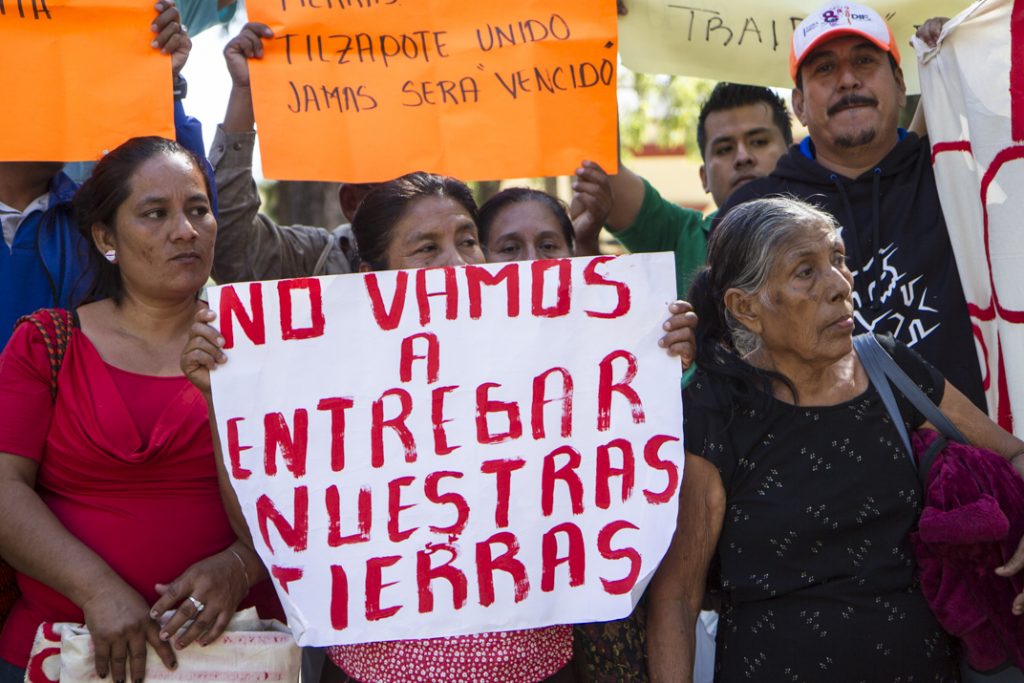 Recently, on December 6, agrarian authorities and representatives of various communities from the Coast, the Isthmus of Tehuantepec, the Southern Sierra, and the Central Valleys of Oaxaca, as well as the nonprofit Tequio Jurídico, met in the community of Morro Mazatán, municipality of Santo Domingo Mazatán for the “Regional Encounter for the Defense of Our Territories”. It was a space for sharing information and organization, “for defense in the face of megaprojects and extractive projects, among them mining and Special Economic Zones”, states the encounter’s declaration. The community of Tilzapote participated as well.

Meanwhile, on December 8 the residents of Tilzapote carried out a mobilization on the coast, from the community of Santa María el Tule all the way to Tilzapote. “It’s an injustice on the part of the Agrarian department and the Unitary Agrarian Tribunal. They were directly involved with a rigged, dirty judgment, where the community of Tilzapote’s voice was not heard”, said Cruz.

For the Zapotecs, “dialogue has broken” and they have started the process of strengthening their organizing. “I was born here and grew up here 70 years ago. The machines have arrived, threatening to remove us, and they’ve threatened us many times. We say that we’re not going to leave. These are our lands and here we will remain; we are going to fight”, said Santos, the elderly woman mentioned above.

“We want the supposed owners to show themselves; we want to know them by their faces. Because here we are fighting for our land, our life. We will go all the way to the final consequences; we are not going to turn over our lands”, said Estela Pinacho Venegas, of Tilzapote.

Collectives in Europe prepare to welcome the Zapatista delegation

"they wrecked the cemetery, dug up graves, all to make it look like they’d exhumed all the bodies"
Mexico

Oil palm cultivation expands into protected areas in Chiapas with 17,300 acres that the government and companies intend to legalize