Mexico-
Oaxaca: Plans for New, Enlarged Military Base on Communal Lands
7 December, 2017 by Ñaní Pinto in Mexico-
Spread the love 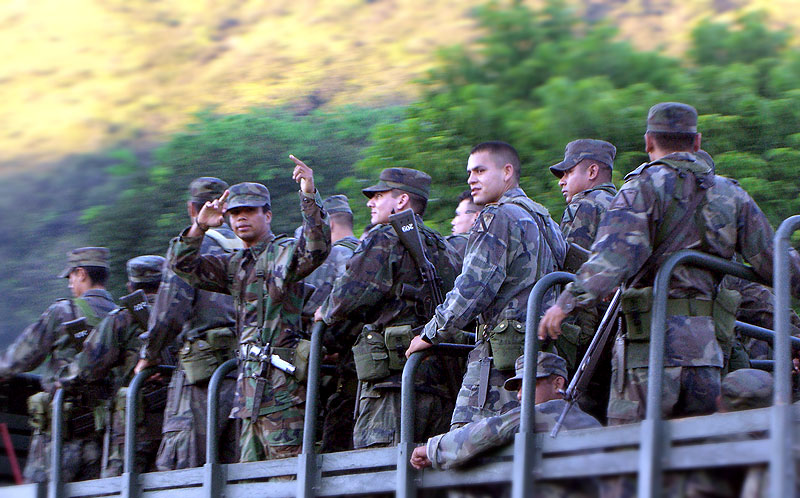 In the beginning of 2017 after an order from the federal government, Alejandro Murat, the governor of Oaxaca, announced that the 28th Military Zone’s campus, today located in the municipality of Santa Lucia del Camino, would be enlarged in terms of infrastructure as well as number of soldiers and relocated to Tlacolula de Matamoros, just 30 kilometers [19 miles] from the city of Oaxaca. This announcement provoked an immediate response from the region’s inhabitants, who made it known that they would not allow the installation of the base.

The donation of 300 hectares [741 acres] of communal lands was initially proposed to the state government for the relocation of this new military complex, although these lands are legally under the responsibility and protection of the community members of this region, where the highest authorities are the community assemblies. The SEDENA (Ministry of National Defense) and the state government first attempted to approach San Mateo Macuilxóchitl, where they were rejected in a general assembly. Afterwards they approached the neighboring community of Teotitlán del Valle, and finally, Tlacolula de Matamoros and Villa de Mitla, where they received the same response from the assemblies.

It seemed that the government and the Ministry of National Defense (SEDENA) had changed their attempt at relocation after the population’s decision by assembly not to accept the base or cede their lands, but what happened was actually a change of strategy.

They hired a real estate company that has been using people from the same community to facilitate individual land purchases. “This time, a company that has refused to provide its name to the owners of these plots has approached them through intermediaries not just to make their offer clear, but to agree on a specific price per square meter—which will be settled between the 20th and 30th of this month, November 2017—without mentioning that these lands will be used to put in the military base,” declared the residents of Tlacolula de Matamoros in a statement published November 13, 2017.

“First they approached asking for copies of the property titles and offering between 150 and 170 pesos [$8 to $9 USD] per square meter. Now a new problem has come up—speculation on land prices. Because they’re offering people a laughable sum, dispossessing them and then increasing the price by five or seven times,” Javier Ruiz, a member of the Autonomous Investigation and Action Group who has accompanied communities in the region, told Avispa Midia.

The town’s inhabitants have several concerns over the impacts that the military camp will bring. “Environmental, social, and cultural impacts generated by new housing developments and shopping centers,” they point out in their statement.

In March of this year, Division General Alfonso Duarte Mújica, who holds a Military Staff diploma, confirmed that the SEDENA base, with more than 5,000 soldiers, could trigger economic growth in the neighboring communities. Between the salaries of troops, officers, generals, etc., approximately 25 million pesos [$1.3 million USD] flow through this base monthly: “These resources,” he said, “could be taken advantage of by stores, hotels, restaurants, and transport companies in the area where the new army base is built.”

It seems the government and the SEDENA have been quick to mention the beneficial impacts for these communities, but they haven’t talked about any of the negative effects, which any project is obligated to, no matter the field. “The effects of the population increase in the region will be a shortage of potable water, insufficient garbage collection. And then there are the experiences from other contexts in other Mexican states where the military has established itself and we see a proliferation of the sale of drugs and alcohol, abuse of authority, venereal diseases, bars and brothels,” added a member of the Autonomous Investigation and Action Group.

See also: The US Southern Command’s Silent Occupation of the Amazon

“Faced with all of this, the concerns come with questions about the size of the base, which is comparable to the size of the city of Tlacolula. Why do they need a territory that’s larger than the Salina Cruz refinery, the Tuxtepec brewery, the cement plant in Lagunas or the factories of the Papaloapan Basin [all large industrial projects]?” ask the residents of Tlacolula, who have put out an urgent call to the region’s communities to remain alert to this project’s developments.

The concerns of the inhabitants of the Central Valleys of Oaxaca with the base’s installation are in part due to the fact that this base is directly linked with more than 50 mining projects and wind farms that are on the docket for their communities.

“At first we didn’t know why they were insisting on the relocation of the military base, but it’s because of the importance of Highway 190 and the international highway in terms of commodity flows [translator’s note: the state is seeking to build a new international superhighway through the region as part of the Puebla-Panama Plan]. The second matter is what we call the mining corridor, where we have identified 50 mining projects, which run from the community of Totolapan all the way to the village of Lachigoló,” states Ruiz.

Oaxaca is one of the states in the Mexican republic where struggle and resistance in defense of communal lands, and the territory as a whole, are on the increase, and this has led to situations where the state has employed extreme violence. “As such, having a military base in the middle of a context of territorial defense makes these communities vulnerable,” maintains Ruiz.

The experience of other communities that have had to deal with the presence of a military base in their territory has made it necessary to self-organize in this region. “At the moment it began, this organization was spontaneous, due to the army’s actions in other parts of the country. There’s a general consensus of distaste and fear towards members of the army. The people are also clear on the fact that the army won’t bring any benefits to the communities; on the contrary, it’s widely known that it will always stand guard so that the investors can freely carry out their extractive endeavors,” says Ruiz.

The Autonomous Investigation and Action Group has taken on an arduous task, in partnership with the communities of the Central Valleys: doing the job that the companies and state and federal governments are responsible for, in terms of the negative effects that the many projects designated for the region will generate. “It’s not just the projects in the Tlacolula Valley; it’s an intrinsic relationship with the wind farms in the Isthmus of Tehuantepec and their transmission lines, as well as the Special Economic Zone that they’re trying to establish in Salina Cruz. These projects are connected and we believe that the presence of the army in our communities is responding to a need to control the population,” charges Ruiz, who is also a resident of the Tlacolula Valley.

Meanwhile, the communities of this region are planning an urgent assembly that will take place in the course of the week. They have made it clear in their statement that, faced with this scenario of possible dispossession and the imposition of an unknown project, they demand “the clarification of this matter from the municipal and state authorities, as well as the rejection of any complex that might affect our territory.”

Click here for the complete statement by residents of the valley (in Spanish).